Noodles are an integral part of the Vietnamese diet, and there is an astonishing variety of types sold fresh in every market in Vietnam. These same fresh no`odles are available in some cities in the States, but not everywhere. Dried noodles, which can be found readily in many stores and online, are a fine substitute.

Called mien in Vietnamese, and also known as glass noodles and bean thread noodles, cellophane noodles are typically used in fillings, like the Vegetarian Steamed Buns or the stuffed squid, or in delicate noodle stir-fries. In the United States, they are only available dried, in various-size packages. Check the list of ingredients. You want to find only mung beans and water on the label. Beware of brands that contain other ingredients, as the noodles are usually brittle and of poor quality. Rehydrate cellophane noodles before using by soaking in hot water to cover for 10 to 15 minutes.

There are two basic types of rice noodles, flat and round. The flat noodles are traditionally used in pho. You can find them dried (and in some places, fresh) in thin, medium, and wide widths, but the narrowest ones are best for soup. They are usually sold in 14- or 16-ounce packages. Before adding the noodles to soups or stir-fries, boil them in a generous amount of unsalted water until they are tender yet still have some bite, then drain and rinse with cold water. If you are using fresh noodles, they do not need to be precooked. 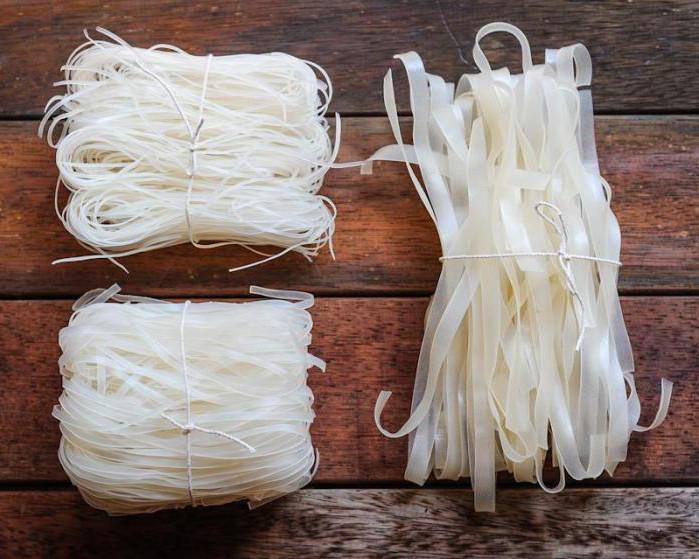 Bún Bò Hue is traditionally made with round rice noodles that resemble spaghetti. They are available dried in various thicknesses, either as straight sticks or in skeins. If the package specifies size, look for “large” or “extra large.” These noodles should be boiled in a generous amount of unsalted water until they are tender yet still have some bite, then drained and rinsed with cold water. The cool noodles are added to bowls, then the hot stock is poured over. Homemade fresh rice noodles can be substituted.

Although you can buy dried egg noodles, fresh ones are much better and are stocked in both supermarkets and Asian groceries. They are often labeled “Chinese egg noodles” and are available in a handful of thicknesses. For soups and stir-fries, I think the thinnest type (1/16 inch) is best. As with rice noodles, egg noodles should be boiled in a generous amount of unsalted water, then drained and rinsed with cold water. Uncooked packages of fresh egg noodles can be frozen for up to 3 months, so buy a few packages at one time. Thaw them in the refrigerator completely before boiling.

This site uses Akismet to reduce spam. Learn how your comment data is processed.